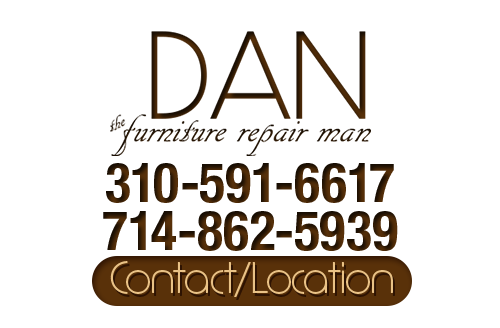 "5.0 star rating 6/15/2016 - Dan the furniture repairman is Johnny on the spot I've had a project for over a year-and-a-half I've been having trouble with and unable to find anybody that can fix it. We did some tile work for a customer in Long Beach on her tile backsplash we taped off the side cabinets with blue tape and after the job was done we pulled the blue tape off but it pulled a lot of the stain also so as we were trying to protect it it just made it worse and it was a whitewash cabinet I had three different guys out there couldn't fix it I found Dan online he was able to go out the very next day and solve this problem for me and the customer was so happy that it had finally gotten fixed and the repair blended in and couldn't see any damage. And it looked like new..
Thank you very much Dan I really appreciated. It five stars all the way!"

"5.0 star rating 6/14/2016 - Dan repaired a mid-century modern armchair with a splintered arm/leg for me. It was a complicated job due to the upholstery. He did it with mastery - looks fantastic - you can't see where it had been broken. In addition, he picked it up at my home and once it was repaired, he returned it. What a relief to NOT have to transport it and pick it up from him. Dan also was responsive -- promptly returned emails and texts and showed up when he said he would. I have given him 2 more chairs to restore."

"5.0 star rating 6/10/2016 - I have an antique dresser that belonged to my father as a child that was very wobbly and about to come apart. Fortunately, I got ahold of Dan first and chose him to transport, re-glue and bolster this piece. Dan also cleaned up the wood on the top of the dresser and put new coats of lacquer on it. I am very happy with his work and he did the work within a reasonable timeframe. I would not hesitate to get Dan to work on further restoration projects as they come up."

"5.0 star rating 5/14/2016 - Incredible! We have a bar that belonged to my father in law and was built in the 70's. It was a beautiful mid century piece, but over the years it had some water damage and we'd had it refinished (poorly) so it was looking awful. We called Dan as a last ditch effort to save it.

AMAZING! He not only repaired the water damaged spots (you can't even tell where they were) he returned the bar to its incredible original state. It's like a whole new piece of furniture. We can't stop starring at it.

I honestly didn't think there was any hope, but Dan does such good work I am now convinced he can fix anything. More importantly, he's honest, well priced and kept us in the loop at all times with text updates and photos. His timeline was very reasonable and he picked up and delivered.

I would absolutely recommend him and I would most defiantly use him again."

"5.0 star rating 3/19/2016 - Dan is simply THE BEST furniture restoration and repair specialist I have ever had the pleasure to work with. I have a saltwater aquarium whereas the cabinet stain had been badly eaten away from the harmful effects of saltwater and Dan made it look like brand new! In addition, he replaced the existing rusted out hinges with new custom fitted stainless steel ones and installed wooden knobs to the cabinet doors and was able to match a very difficult color stain. Furthermore, Dan was very reasonable on the price. Don't waste your time calling others - Dan is the man to call for your job!"

If you are looking for antique furniture repair testimonials in the Santa Monica area then please call 310-591-6617 or complete our online request form.

Dan is very professional and his work is exquisite. I was so impressed with the fine polish/refinishing job he did on my antique bedroom dresser [...]
- Gina M
Read More

Dan repaired a mid-century modern armchair with a splintered arm/leg for me. It was a complicated job due to the upholstery [...]
- Richard A., Garden Grove, CA
Read More